As an avid SG-1 fan, I was delighted to spot this in my local shop, and I snatched it up immediately. I hadn't heard a single thing about it on official channels, but I'm way out of the loop, so it's totally understandable that I missed out on all the hype. Here is the Gateworld announcement from March this year, and the Comic Book Resources article slash interview.

Vala's a hoot, and I figured that any glimpse at her history would be interesting and funny. I was sort of right. I experieced a bit of disappointment pulling the comic out of the bag to read. The cover art is delightfully video-game reminiscent, and a little dark. 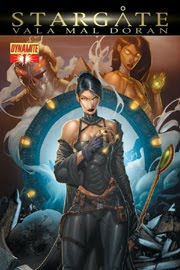 (Image taken from Gateworld, a really informative Stargate news and general info site)
However, the art inside is just traditional, good but unremarkable comic-book-style art.

Vala's character seems pretty true to form; she's witty, devious, unscrupulous and a little bit silly. I didn't recognise the writer's name - Brandon Jerwa - so I did a bit of snooping via Google. Turns out he pretty much specialises in tie-in comics, so I am fairly confident he'll do a good job adding to the Stargate world and accurately portraying the loveable scamp Vala.

The first page provides a bit of info on timelines - this adventure takes place sometime after Vala had been taken over by Qetesh, but before she falls in with the SG-1 crew. We see Val has - as per usual - gotten herself in over her head and is attempting to turn things around through lying her leather-clad butt off. In the interview with CBR, Jerwa says that the SG-1 crew will be appearing later in the series, as the timeline movies into more current territory.

This issue is filled with a very colourful array of aliens, a hearty dash of intergalactic politics, cool gadgets and Vala's signature close escapes. I wouldn't call this a vital piece of the Stargate pie, and of course it'll appeal mostly to the SG-1 fans. From the comments on the Gateworld announcement, I saw a few disparaging remarks directed at the fact no 'official' Stargate writers are affiliated with the project.

I myself won't be following this series avidly; I'll probably wait a few months and pick up a bunch of issues at once. There is a bit of a rumour going around that Stargate SG-1 will have a season 11 in comics, a la Angel and Buffy. If this goes ahead, my wallet will cry and I will have to sit down and watch seasons 9 and 10 all the way through. After season 8, I sort of got distracted by Firefly.