Because I got so horribly behind on my comic reviews, this is going to be a 5-issue review, done in 2 parts.

Issue #0
On Free Comic Book Day last year (if you haven't heard about it read this) I picked up this gorgeous thing: 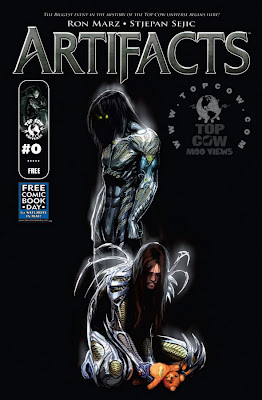 I found the cover extremely intriguing, and the intro even more so. In it, the story of the Thirteen Artifacts is being told to Aphrodite IV, a state-of-the-art, absolutely lethal cyborg.

The Artifacts themselves have been the subjects of several series in the Top Cow comic universe: the Magdalena, Witchblade, and Broken Trinity (among others). However, this series is not just for old TC fans - it's being touted as a good introduction for newbies as well. Issue #0 contains information on the Artifacts and their bearers. All but four of the bearers are named and described. One Artifact, the thirteenth, is lost. Two Artifacts have unclear locations and the final fourth is held by the narrator, who does not reveal himself or talk about his Artifact.

The artwork is just wonderful and I love the way Aphrodite looks - in fact, her lips, eyes and hair are the exact same shade as my High Voltage Lip Whip in Iron Butterfly! (Do I smell a makeup look in the works?) 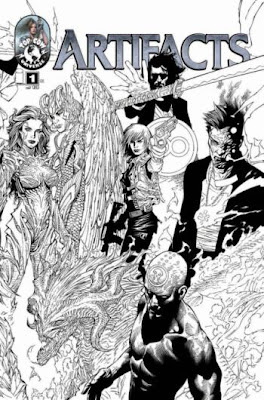 I strongly dislike black and white covers, and I just realised why - they remind me of children's coloring-in books. The urge to grab a pencil and just go at this is almost irresistable! The first page of this issue more than makes up for the cover, though - dramatic, full-page, strong female character! If that wasn't enough, there's some great banter and the main female character has a kid. Realism ftw!

The art in this is great. It's not photo-realistic, but it's not sketchy or cartoony either. There's a real depth to the color palette - each page has great mood, there's variety but not so much that it disrupts the tone of things.

There are four panels featuring Aphrodite that irritated me a LOT (panty shots. Real classy) and totally blew my happiness about the first page out of the water. I guess you can't expect the entire comics industry's portrayal of female characters to change overnight.

There was a pretty thorough storyline intro in this issue, if a few too many un-introduced characters who are sort of floating on the peripherals. It was enough to make me buy issue 2. 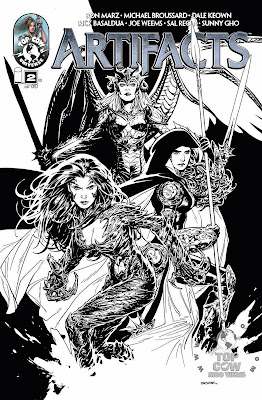 Again with the black and white! *grumbles*


There's some really nice - if rather blatant - symbolism in the first few pages here. The artwork pulls it off beautifully - again a muted, but not dull colour palette.

There is a really beautiful  intertwining of supernatural and mundane happening already - my absolute favourite element of any fantasy/sci-fi story. Saving the world doesn't mean a character is exempt from or should be unaffected by things like family squabbles, bickering and friendship drama. If you can successfully intertwine or at least balance these two types of conflict, you've got me hooked. There's some blunt but well-appreciated exposition, telling us a bit of backstory of the holders of the Artifacts, and how they're all connected (besides the fact that they're all bearers).

This issue ends with a nice cliffie, so I was glad I picked it up at the same time as the next issue... except you'll have to wait to read about that in part 2 of my review.

Muahahaha.
Posted by Jade Carver at 11:54 AM