I'm on a total green kick at the moment. This colour is called Spanish Moss. I expected this to be pale, almost pastel-like grunge, but it dries to this amazing dark and moody colour. There's a hint of silver shimmer in the bottle, but on the nail it's a straight creme. Middle pic is the closest representation of the colour. Two coats was all I needed. 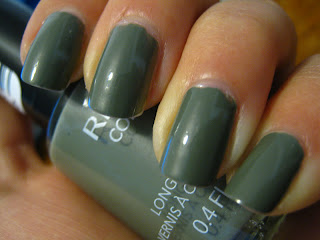 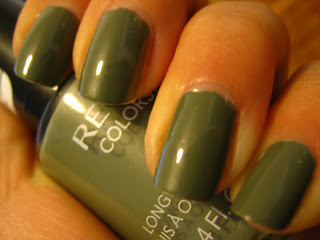 Bonsai is a beautiful bright, grassy green with yellow shimmer. Although I don't own Zoya Midori, this seems to be a less sparkly version. It's a little sheer, I needed three coats before I stopped seeing VNL. 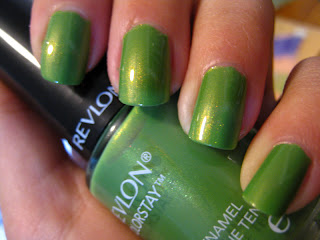 The last colour I got was the infamous Revlon Perplex, which was released in Australia under the name "Naughty". Seriously, the names on the Revlon polishes here are so weird. I remember seeing those hex glitter ones everyone was raving about and shaking my head over 1) the inflated Aussie price, and 2) the weird-ass new names. I don't understand why Revlon has to rename products to be released in Australia. Sure, American and Australian English isn't exactly the same, but it's not all THAT different either! I didn't  bother swatching it because there are SO many swatches around already. It did look a lot darker in the bottle than I expected, though.

I can't tell you the prices of any of these lacquers because I did that thing you do, when stuff is on sale and you can't decide which one you like better, so after a minute of frenzied consideration you suddenly declare (not always out loud, but I actually did) "I'LL JUST GET BOTH". I had an enabler with me at the time, so I wasn't just talking to myself. Geez, I hardly ever do that in public any more! I also grabbed two Lanolips glosses that were on sale. I'll be swatching those shortly, though they're both fairly neutral colours.