Reading comics straight after creative writing workshops is GREAT for review purposes. Enjoyment, not so much. I started critiquing this straight away while I was reading! Not because it's bad, but because I had my "critical reading" hat on. I tried to stick to a straightforward review and keep some of my overly analytical comments to myself - I was doing some major "Ooh this word choice represents the paradox of blah blah blah"! 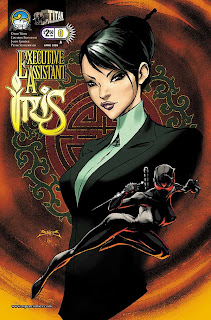 This is an older series (it began in 2009) that I've only recently gotten my hands on. It seems to have petered out at the end of last year, finishing with issue #5 (making it 6 issues long). I'm not sure if it actually finished there, or it just wasn't popular enough to continue.

I do love that this series' main protagonist is female. However I'm reserving judgement as to how well they develop her character.

This series looks to be full of bloodshed, secrecy and politics. Basically Iris' role as "executive assistant" includes being "a secretary, a bodyguard and an assassin". As to whether or not, as one of the unfortunate henchmen in this issue claims, she's also sleeping with her boss... We'll find out later. If she is I will most definitely stop reading - what would really make this series for me would be seeing a real divide and dichotomy between Iris at 'work' and her private life. I want contrast, I want to see that as well as being a cold-blooded obedient murderer, she's a woman too. Hopefully not a woman sleeping with her boss.

Anyway! I quite like the art so far, especially the viewpoints and the colouring. I wish Iris' business suit skirt was a bit longer and her assassins' costume was less "shiny", though. Sexualising female characters is a comic book 'thing' but I feel it takes away from how powerful and dangerous, and potentially complex she is. This is a gripe about the whole industry, I don't mean to single out this series at all. Artifacts does it too, even though several of the main characters are strong and powerful women.
In regards to this issue specifically, I have ONE bit of criticism which is a bit spoilery, so you might want to skip to the conclusion right at the end :)

The second to last page, when the
Posted by Jade Carver at 3:44 PM