Two things that I just don't really like, no offense to the things or to other people who may like them:
1. Photorealistic art
2. Horror and/or suspense

This graphic novel contains both of them. 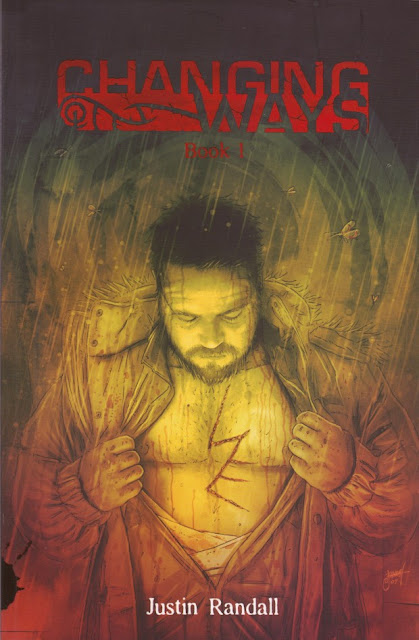 I've already written about how the cover of this graphic novel caught my eye, and how I nearly went away without it, but my boyfriend (who, I might add, doesn't even read comics) saw the look in my eye and promptly bought it for me.

You're probably now expecting a tale of woe, or at least mediocrity, but... I LOVE this graphic novel.

art
As I mentioned before, the art is photo-realistic. One of the problems I have with some very cartoonish art (especially in uncoloured webcomics) is that I have a hard time telling minor characters apart. Each character in Changing Ways is so distinct and beautifully rendered. Expressions, body language, clothing - all distinct and lovely to look at.

The colour palette is expressed in the cover. I LOVE continuity between cover art and comic art! Each spread is consistent to the scene - inside under artificial lighting is a yellow glow. Outside in the rain is a cold, dark blue-grey, almost monochrome. Tail-lights, sunset, fire and blood are all red, a faded yet vibrant shade, like a watercolour. I want to frame every other page. You cannot appreciate how truly gorgeous this is until you read it.

Yes, because it is a horror story is has some 'gory bits', but they're just so... I don't want to say 'tasteful' because that just sounds dumb. It's done well. Not cartoonishly graphic like in Nemesis, but not in squeamish 20's fade-to-black style either. It's just kind of "hey, that happened, it was kind of gross, but we're moving on with the story now". 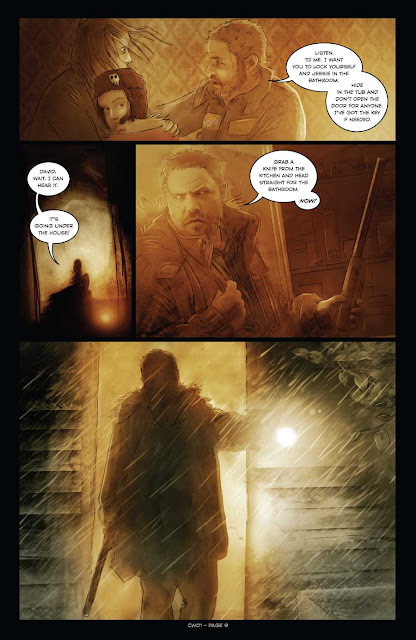 That last panel is one of the ones I wouldn't mind having framed and on my wall. Isn't it amazing?
story/characters
Now, Justin Randall wrote this as well as doing all the artwork. But don't let that deter you - this is most definitely NOT one of those comics you buy just for the artwork (as gorgeous as it is). The story itself is mysterious and chilling. Justin assured me at Supanova that "it's not a zombie or vampire story", so any hackneyed horror fans will be safe picking this up. That said, this is a very relationship-and-character driven story. The mains have very distinct personalities and the way that they all interact is so realistic. There's plenty of dialoge but it doesn't overwhelm the art/action. The bubbles are clear, but unobtrusive, and it's always clear WHO is talking. There is a little first-person narration which is done in small, black boxes with red borders. Again - clear but unobtrusive.

The pacing in both the dialogue and the narration is masterful. The panels without text have amazing body language/facial expressions to hold the mood and the story. All sound effects are done in this awesome sketchy, hand-written style with the appropriate colourisation for each panel.

I cannot freaking wait for the sequel. 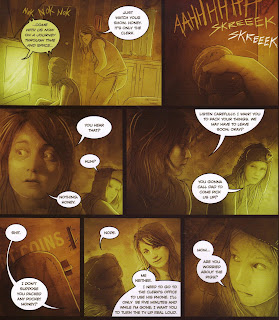 Simple, honest, realistic dialogue.
conclusion
Buy it, read it, love it. Even if you don't like horror, even if you don't like photo-realistic art, even if you're a hardcore superhero comics devotee. It's over 100 pages, a proper graphic NOVEL, so it'll keep you going for a while. And going back for another read. And another. And another. And cursing Justin Randall for taking so damn long with the sequel!!!

You can see some sample pages here if I haven't convinced you with my babbling. You will totally spoil the novel for yourself though.

Disclaimer
All images copyright, owned by and belonging to the amazing and fantabulous Mr. Randall.

I paid for this graphic novel with my own- er wait, no I didn't! Hehe. I also got a copy for free, which is something I'll do a post on later.
Posted by Jade Carver at 11:53 PM