Sorry for the silence, AGAIN! I actually have a lot to blog about at the moment, I've just been rather unmotivated. Also I broke my camera, so swatching is going to be a bit tricky. Sigh.

Remember my lovely comics haul I posted about yonks ago? Well one of the "ooh that looks nice I'll try that!" issues I picked up was called Nemesis. The cover was ironic and promising, even if the monochrome cover was a bit odd. And the tagline sexist (really not unusual for mainstream comics, sadly). I'm used to colour in my cover art, thx. 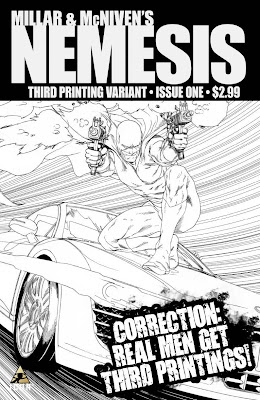 Art
After the very simple cover, I was surprised to get into chapter one and see really detailed, realistic artwork. It's not really comic-y or cartoon-y at all. The cityscapes look like they've been carefully modeled off photographs and the people are... almost too detailed. You can see the lines and sweat and muscles under people's skin. It's almost a caricature designed to highlight the wear and tear of mortality. Like an extreme-closeup in a movie that presents body parts rather than the person as a whole. The colours are quite muted and dull, as well - lots of grey, washed-out blue, faded red and yellow.


Lettering
Chris Eliopoulos is either freakishly neat or he is a computer.


Writing (dialogue, characterisation etc.)
From blurbs, the title and the artwork I knew this was going to be a parody of the traditional superhero/supervillain genre. One must expect a certain level of crudity in parodies - I know this. However, the dialogue was too cliche. The characters too predictable - to the point where many of the main figures became irritating. The storyline was nothing new. To shock/surprise the comic relied on one thing:


The ick factor
Look, I'll be clear: I don't like gore. I don't mind a certain element of violence, and a bit of blood and dismembering is ok by me. But when it becomes gratuitous to the point where its, "Oh crap we accidentally ordered five times as much fake blood as we actually needed.... Oh well, let's just use it all!" That would be the point where I go "Nuh uh, no thanks." Nemesis has some cool explosions (done in muted colours, which I don't really understand) but it also features a lot of blood - unrealistic amounts - and several panels' worth of body parts being strewn every which-a-way.

Conclusion
I was really disappointed in Nemesis. I mean sure, some great classics like Watchmen and Wanted do use gore for shock factor, but that was in conjunction with complex characters and unusual storylines. You can't just use violence to get by. I won't be picking up #2 or recommending this to anyone.
Posted by Jade Carver at 2:59 PM